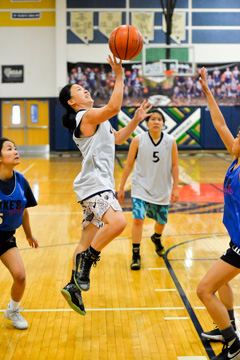 All tournament games will be played under NAU & WAU eligibility rules along with the following:

1. All games will consist of two twenty-minute running halves with stop-time.

2. The last fifteen seconds of the first half and the last two minutes of the second half will be stop-time for all games.

3. A thirty-second shot clock will be used for all games upon request only.

6. Backcourt and ten second rules will be in effect in all divisions.

7. The three point line will be used only in those gyms that are properly marked.

8. California High School rules regarding free throws will be used.

9. If there is a fifteen point or higher point spread in the last two minutes of any game, the clock will not stop until the spread goes under fifteen points.

10. Teams must wear similar color uniforms with permanent numbers on both the front and back. Tape will not be allowed to make or cover a number. Any violation of this rule will result in a technical foul. The home team will be required to change jerseys if there is a conflict in color. The team on top of the bracket will be considered the home team.

11. No player may play for more than one team. Once a player plays for any team, the player can only play for that team during the tournament.

12. There will be a grace period of fifteen minutes for the first game on Friday night only. A ten minute grace period will be in effect for all other games. No team can start a game with less than five players.

13. Rosters are limited to those players that have been submitted prior to the tournament deadline. Awards will only be given to ten players. No additions will be allowed at any of the games.

15. No alcoholic beverages or smoking are allowed on any school campus. If you are caught by school personnel with either substance, you will seriously jeopardize future standings for the entire tournament.

16. Each team is responsible for its own insurance.